I'm loving this. Real quick, does the game have any sound?

its beautiful - only complaint is that it ends

I loved this game.

In terms of gameplay, it's more of a timing and typing game than a puzzle game, but it is really well made, and a lot of thought was put in renewing how we approach the levels. There are many twists that will recontextualize every elements of the level, for example quards being able to open doors, the X 'monster' being able to kill other guards or even Hunter which changes the game entirely thanks to RNG.

I really loved the story bits and other setpieces making me interract with the characters, making them more than just gameplay elements, which played a big part in setting the tone of the game. The story was fairly cliché, nothing surprised me, but I believe it was with intent, reinforcing the idea of getting back to the time where we started seeing on cinema hackers typing random shit on green on their big square laptops. And I still ended up carring about the story, and litterally 'playing along' thanks to the writing.

Also quick thanks for not having any weird characters anywhere to type. As someone on azerty keyboard, I sometimes have trouble with these kind of games made for qwerty.

Also another quick thanks for taking your time to work around how to integrate in-game explainations for why each command exists, and how you can interract with the characters, it really helped me with immersion.

I do not know how to conclude, as this comment is mostly just dumping why I think this game is amazing.

I really enjoyed this game, though I had absolutely zero audio the whole way through, was that normal or was my game bugged out?

I really really like the look of this game, but it keeps kicking me out at seemingly random times.

Is anybody else having this issue, or does anybody know what I can do to resolve it?

This game is AWESOME! Not enough well made stealth games! Love the graphics, gameplay makes me feel like a hacker from a 90's movie, and the story is excellent! Emotionally invested in an '@' and 'X'. The cutscene in the quarantine area is really well done! More people need to play this game!

this game is absolutely wonderful! so much good from such a simple concept, will be telling all my friends about it!

This is such a great idea for a game! The minimalist approach really let my imagination visualize everything. Thanks for including the ability to skip, I love the idea but I'm nowhere near fast enough to play this.

Reply
Another Gamedev Studio270 days ago

Very interesting so-far, this is going to be fun 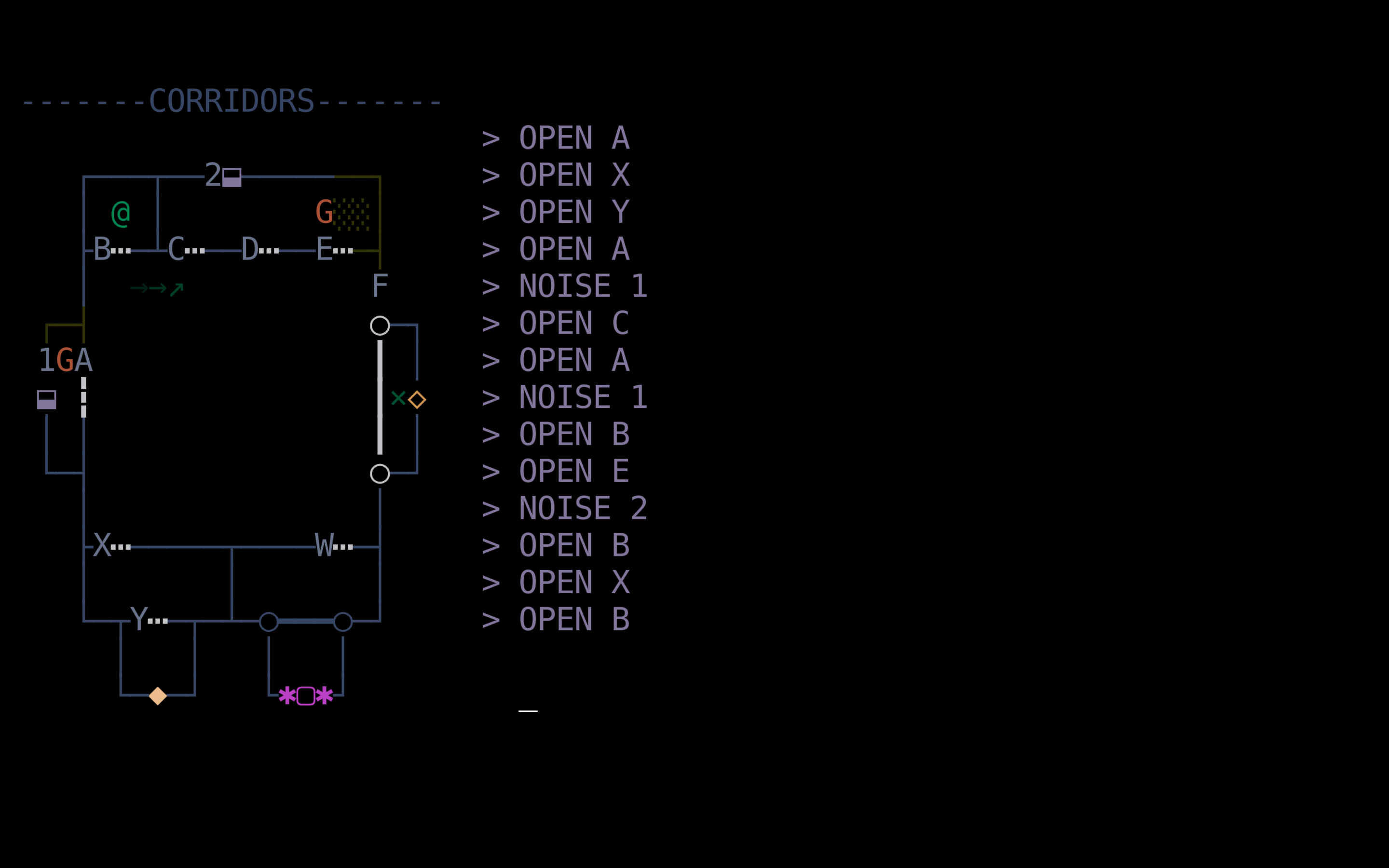 um... why does the pathing restrict me from running straight to door F?

Absolute banger.  Genuinely furious more people have not played this

Reply
Dave the Knave1 year ago

Thank you so much for submitting NOISE 1 to the itch.io bundle for racial justice and equality! I've been reviewing games for my indie gaming site from the bundle and stumbled across NOISE 1. I loved the way you made this game!

Full Review is here in case you're interested: https://knavegaming.com/noise-1-review/

Your game is amazing

I'm from Perú, thank you for this amazing experience for real.

I really like the game, but I put it down for a few days and can't remember the command to toggle the lasers. Can somebody remind me? An in-game HELP or command list would also be greatly appreciated :)

I really felt for x and @

I went fully sweaty tryhard near the end there. This was a lot of fun!

This was really fun and interesting! I need more typing-based puzzle games.

This was really good!! I only played it once-are there two endings?

it is quite interesting and also really fun.

Amazing little game. So simple, yet challenging! Definitely got really frustrated on some levels, but that’s more a my skill level versus the game design itself…(I can’t type without looking at the keys, so I had to memorize the routes and do them basically blind on timing alone) Thank you for adding a skip function! I’m a big fan of storytelling done in a one-way system like this, but it can get boring if it’s just paragraphs upon paragraphs. Having short sentence bursts with the added tension of the puzzles kept it fresh and made me want to figure out the puzzles to read more. The realistic way the dialogue was written had me hooked from the first screen. The only “bad” thing for me was the instant way the conversation replied after a ping, with no time for “real typing” of a reply. But, I assume that has to do with the way the game itself needs to function for the puzzles to work, so I can’t even really complain about it. Overall 10/10 curse my shaky hands and poor typing skills.

The most jarring aspect about some of the console/terminal based games is that they just do not behave like actual terminals. When I press 'up' on a keyboard, more often than not I want it to move to the previous command that I typed instead of moving text in the terminal.

Would be incredible if there was an option to enable the authentic behavior. Feels quite eh to play otherwise.

yeah, a couple folks here and there have requested this. i didn't add it cuz it didn't seem like it'd be particularly useful (maybe like, a little bit), and didn't seem too fun. but it'd be mostly harmless to add, so maybe if i ever do an update i'll drop that feature in for kicks.

That game is amazing! Super fun to play, it has the right balance between puzzle and action in my opinion. The difficulty is nice too (for me at least), not too easy (I had trouble on some levels) but not too hard (it never really got frustrating and I never had to SKIP)

The gameplay at the ending was very fun, I love how you found unique ways to change how it works while keeping the same global idea and just changing some elements

This is quite fun and sucked me in for several levels in a row. I love the growing difficulty and expanded tactics.

The game keeps crashing midway through the first level (at least a half dozen times so far) due to a "Fatal error. System.AccessViolationException: Attempted to read or write protected memory". I took a screenshot that I'll include here as it has a lot of text afterwards: 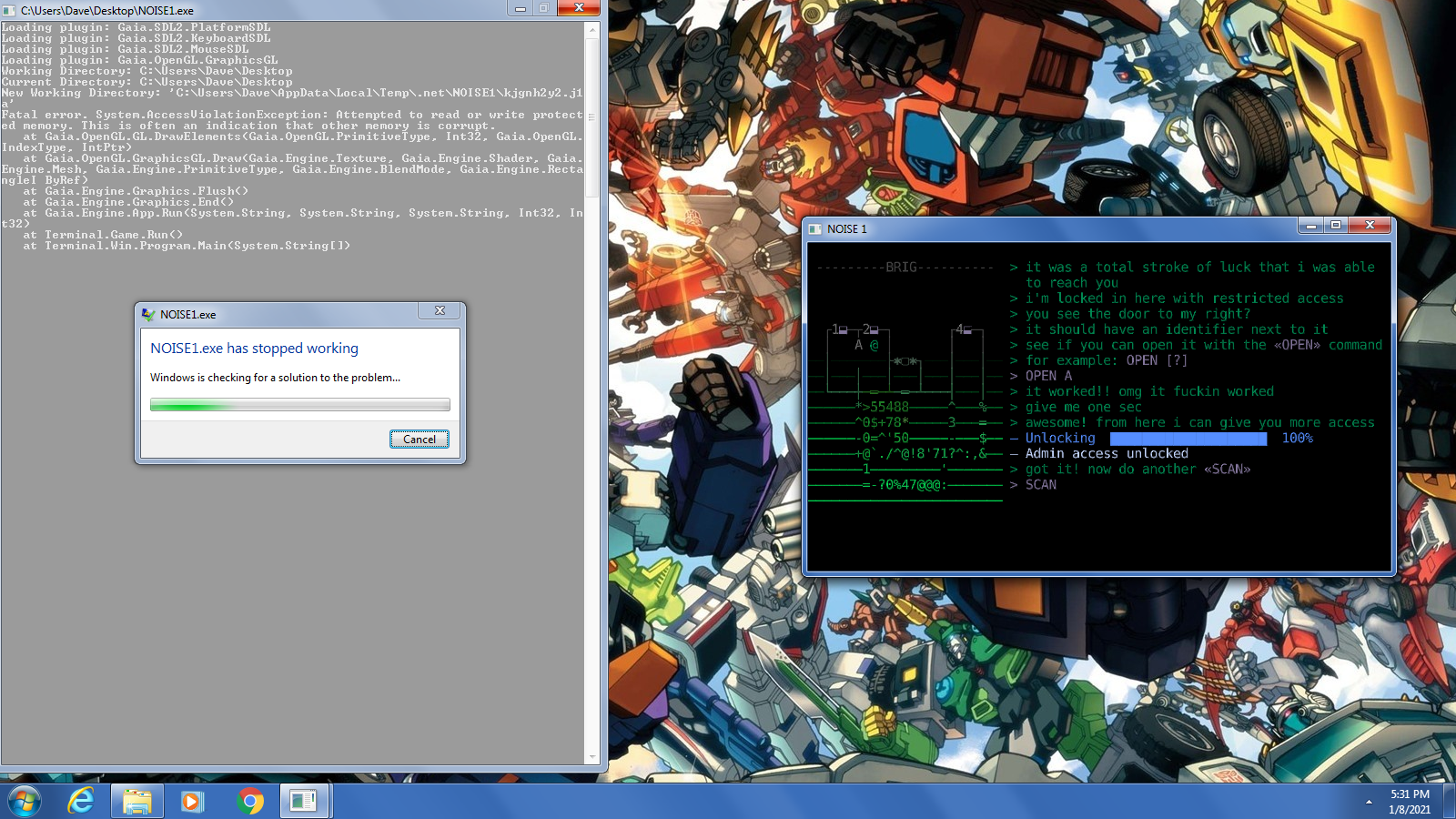 Now I am running this on Windows 7 so it may just be a simple "don't run on that, sorry" situation, but I figure no harm in asking if anyone knows a fix for this.

FWIW the first half of the first level seemed pretty neat! :)

I was not expecting such good gameplay out of this. The work done here, exploring all these mechanics, was super well made. I am so glad to have given a chance to this game, it was worth it! Thank you!

I had no idea what to expect from this, but it's a fun game which deserves some attention.

I think the hacking theme works well here too. As someone who can't code at all, frantically typing commands to manipulate security systems while my ally dashes through does give me that tv/movie hacker feel.

I didn't really know what to expect from this, and I was very pleased with it. This is exactly the kind of game I like, a mechanically novel game with a great story that has a distinct atmosphere and style, which is a real feat given it's all displayed in unicode. The shorter runtime allows each puzzle to feel unique and the story to feel concise and satisfying, with just enough left to the imagination.

Got this in a bundle. The engagement and how much you got me to care about those little letter people was really nice, it was a very good game.
Thanks for making it :)

I don't know why, but when i run it i got errors and requests arguments on .exe running. Any suggestions? Win10 x64 pc and not native with windows. I really want to try it :]

Awesome game, it is amazing how simple and engaging this game is! Could you release a pdf with all the commands? The reason is that i am in an advanced level but i didn't play for a while so now i can't remember the commands. (I only remember SCAN and OPEN; is that all? Thanks and congrats!)

This game is honestly fantastic. The length feels nice and it ramps beautifully. I definitely broke a sweat near the end! It works great as is... but like any good game part of me wants more :P

I recommended to my little 13 year old brother. He was kind of hesitant at first but got immediately hooked once he started playing and loved it. Which I think speaks volumes considering he's only really played big budget games like BOTW or Smash on switch!

aw that's awesome! thanks for playing : )

Amazing game, super easy to empathise and get invested in the story just with the style of writing! And the difficulty level felt just right, never too difficult, but always a challenge in the later levels, makes the emotional payoff feel just right.

Also, anyone looking for a soundtrack to have on in the background while playing, I recommend listening to The Algorithm, really enhanced it imho 𝆕𝆕𝆕

thanks! i'm glad you enjoyed it

Wow, this is very well made! I'm loving it!

thank you for playing!

Man, this game is a masterpiece. From the aesthetics to the actual story, this is good. Went into it expecting it to be like nethack but boy was I wrong, the narrative captured me immediately. Great job man! A got a few questions tho:

1. What engine is this written in?(I'm a fellow game dev and definetely curious on how this is done)

2. If this is a custom engine, then what advice would you give in order to make a game like this? For example, where to start, what language, etc.

(IDK if you will answer this but it is worth a shot, curiosity has no limits)

1. a custom engine written for the game, built on SDL2 and OpenGL
2. i can't recommend any specific learning materials, i've been using SDL2 and OpenGL for many many years before creating this, and it took me a long time to get good at it all

sorry for taking so long to answer. thank you for playing the game, and i'm glad you enjoyed it!

I downloaded this as a part of the blm bundle but i keep forgetting the commands. i really need a way to look at all the commands that i have

Wonderful game, thank you, I loved it! And also thank you for making SKIP command. I skipped some levels, but I'm glad I've experienced rest of the story through gameplay and not by watching somone else play it.